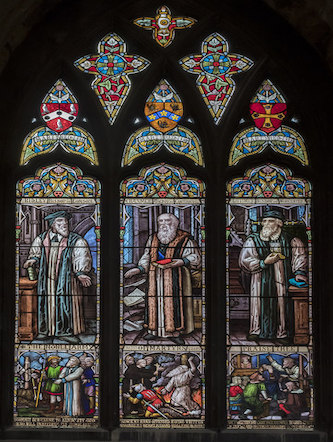 Our Statement of Faith

We believe in one God, the Father, of whom are all things, and we in him. We believe in one Lord Jesus Christ, by whom are all things, and we by him.We believe in the Holy Spirit as our Comforter and Guide; We believe in liberty of Conscience in all matters of interpretation, practice and worship. Our faith is founded in the Scriptures and the Gospels, the traditions of the Apostolic Church, the historical episcopate, the first seven ecumenical councils and the early Church Fathers.  We understand the Old and New Testaments as “containing all things necessary for salvation” and as being the rule and ultimate standard of faith. We also understand the Apostles’ Creed as the baptismal symbol and the Nicene Creed as the sufficient statement of the Christian faith.

We celebrate the traditional sacraments, with special emphasis being given to the Holy Eucharist, also called Holy Communion, the Lord’s Supper or the Mass. The breaking and reception of the bread and wine as representing the body and blood of Christ as instituted at the Last Supper. It also represents the sharing of the table with Christ.  We use the Book of Common Prayer (BCP) which is one of the ties that bind the Anglican Communion together. Our structure, theology and form of worship, is commonly understood as a distinct Christian tradition representing a middle ground between what are perceived to be the extremes of the claims of 16th century Roman Catholicism and the Lutheran and Reformed varieties of Protestantism of that era. As such, it is often referred to as being a via media (or “middle way”) between these traditions. However, because Anglicans in general and our communion specifically, allow for significant freedom and diversity within the areas of Scripture, reason, and tradition, a great many variations in doctrine and practice exist within our churches in the different provinces.

To stand for a Christ-centered, morally sound, Christianity which comprises the Christian faith: the faith and practice of the Apostles and the early Disciples of Jesus Christ, our Lord and Savior. To obey the Great Commission of Christ by carrying the good news to the entire world (Matthew 28: 19-20). Recognizing the unity of the Church of Christ in all the world, and knowing that we are but one branch of Christ’s people, while adhering to our particular faith and order, we extend to all believers the hand of Christian fellowship, upon the basis of those great fundamental truths in which all should agree. With them we confess our belief in one God, whose nature is love, revealed in one Lord Jesus Christ, by one Holy Spirit of grace. We believe that Jesus came in the flesh, died for our sins, was buried, and rose again on the third day according to the Scriptures.

We Believe in Ecumenicalism

This communion is an ecumenical denomination because we believe it to be the will of the Lord Jesus, and is open to walk and collaborate with other Christian denominations from the Protestant or Catholic tradition. This is a communion that lives the fullness of the Anglican “ethos” but allows the coexistence of theological, pastoral or liturgical currents of different orientations in what it believes to be the spirit of Anglicanism. It does not understand a unilateral Anglicanism that only emphasizes this or that theological – pastoral – or liturgical stream, but respects any denomination and as far as possible, joins forces with them to strengthen the final goal of Anglicanism even if they are in different denominations with no official link to ours, which could happen through a frank and respectful dialogue. Therefore the communion accepts currents traditionally associated with a legitimate Anglicanism, that is, the Anglo Catholic, Evangelical, Charismatic and Liberal currents. These currents will be respected and their place guaranteed in this denomination, believing this to be the Anglican spirit in its fullness. The communion wants that all joining the board of ministers are fully aware of this stance and believes that those who cannot envision Anglicanism in this way must seek a jurisdiction that speaks to their heart.

We believe that all the members of the human race have been created equal, in the image of God, and therefore promote inclusiveness in all our churches and ministries. Based on this principle the Communion, allows the ordination of women to holy orders with the same rights and duties of men. We also understand that the Communion makes no distinction as to race, nationality, gender, sexual orientation, social status, profession, marital status, political belief and culture of its members. This Communion is open to ordain and allows the ordination of men and women regardless of their orientation. It believes that debauchery and sexual promiscuity are contrary to the spirit of the Bible, and that all unions that are authentic and loving, between two mature human beings, should be respected and blessed in our church.

We trust in the Lord and therefore we put all our gifts at the service of others, we believe that pastoral and educational work are also important, so we meet the needy in various spaces, schools, hospitals, universities, poverty zones, etc to create new hopes and develop social programs that benefit those who seek us